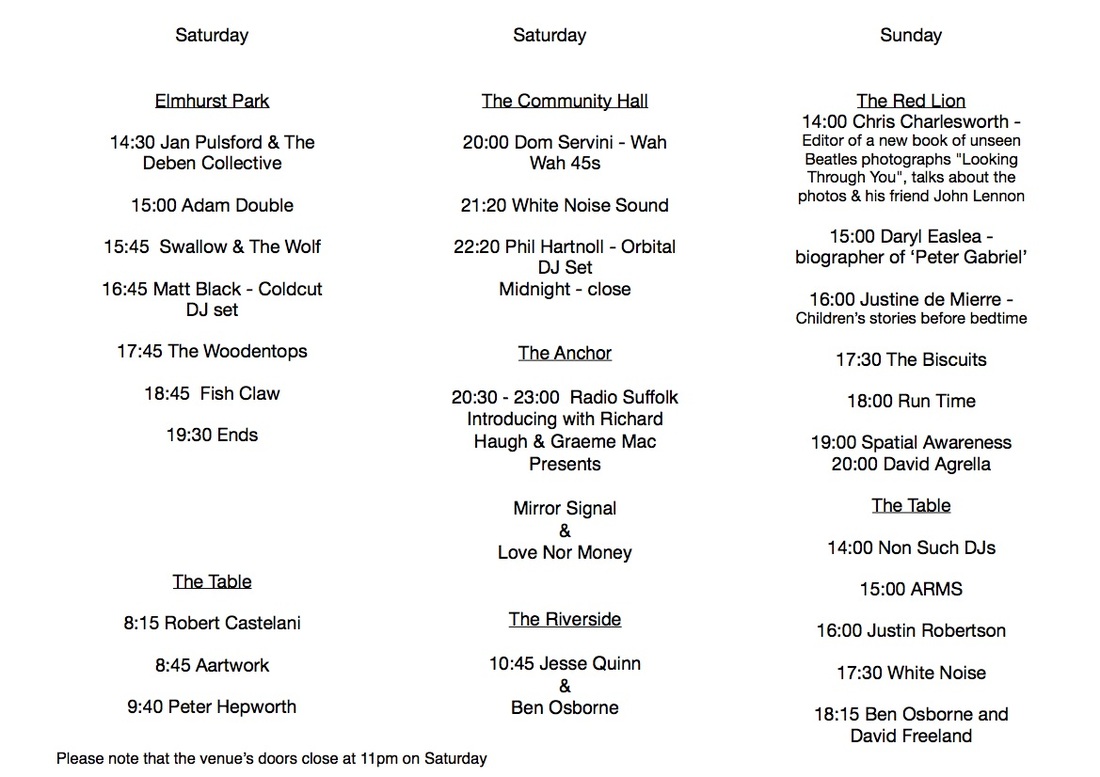 Phil Hartnoll, half of celebrated electronic act Orbital, rose to fame alongside his brother Paul, gaining a huge reputation for their shows at festivals such as Glastonbury (which Q Magazine classes as one of the top 50 gigs of all time). Their rapid rise soon saw them touring in front of tens of thousands across the USA, Australia, Japan and Europe. They gained commercial and critical success, scoring three Top 5 LPs and five top 20 singles. After a brief split, they reformed to play Big Chill Festival in 2009 and were joined on stage by Matt Smith (at the time staring in Dr Who) for their second headline set at Glastonbury in 2010. They performed in front of millions at the 2012 Paralympics Opening Ceremony, with Professor Stephen Hawkings on vocals. The brothers stopped operating as a unit at the end of 2014, but both have new artistic endeavours. This will be a rare UK festival appearance by Phil, in an unusually intimate setting, and is likely to feature new material and never heard before Orbital tracks, as well as his own classic club hits.

White Noise is the pioneering electronic act formed in 1968 by David Vorhaus, Brian Hodgson, Peter Zinoviev and Deliah Derbyshire, of BBC Radiophonic Workshop. Having grown out of an early electronic band that included Paul McCartney in their number, their first LP, An Electric Storm, was released in 1969 and is widely considered to be the first proper electronic album in the UK. The Radiophonic Workshop members of White Noise were also responsible for the theme tune to Dr Who, which Orbital famously turned into a festival anthem.

Orbital have frequently cited White Noise as an early influence, but this will be the first time the members of the bands have appeared together on the same bill.

Matt Black is half of the iconic act Coldcut. Their debut single, 'Say Kids What Time Is It', was an early sample based hit in the UK. This was followed by their debut LP, itself a Top 20 release that spawned 1988's club classic and Top 10 single - 'Doctorin' The House'. Their work with Lisa Stansfield and Yaz, for whom they penned and produced such hits as 'The Only Way is Up', saw them dominate the charts in the late Eighties and early Nineties, before they set up Ninja Tune, their record label, which has discovered such acts as Young Fathers, Mr Scruff and Kelis. Coldcut are, of course, legends in their own right.


Amongst the live bands, the iconic The Woodentops are perhaps the most over-looked Glastonbury headliners (and long time Balearic darlings).

Big Chill Bar, five minutes walk from Liverpool Street station (and therefore one hour and 35 minutes from Woodbridge), will be presenting Dom Sevini of the Wah Wah 45s label. Named by FACT magazine in their alternative top 100 DJ list, Dom is one of London’s most respected left of centre DJs. Ben Osborne (Woodbridge programer and Noise of Art founder) is also one of Big Chill’s longest serving resident DJs, regularly playing at both London venues and the Big Chill festival, alongside his other club and festival appearances in the UK and abroad. As Noise of Art he's performed at such prestigious and unusual places as the Southbank Centre, National Theatre, Tate, Berlin's Volks Buhn, Prague's Acropolis, Glasgow Art School and a two night residency at a functioning Fire Station in central Paris.

BBC Introducing in Suffolk will once again be taking over the Anchor on Saturday night. This time around they’ll be joined by the incredibly talented Mirror Signal, a favourite of Gilles Peterson and Jamie Cullum, and Love Nor Money, who are still on a high off the back of their recent performance at T in the Park.

London’s hotly tipped and fast rising Arms, are a hot new London band also signed to Rocket Girl Records (and the most Traffic like band since, um Traffic).

Music Book Festival Line up at The Red Lion

Featuring: Looking Through You: The Beatles’, ‘Visions Dreams and Rumours’ the Stevie Nicks biography, and ‘Peter Gabriel - Without Frontiers’

Entry with festival wristband. Discount advance tickets are currently on sale for limited period from the Riverside Box Office and on line at www.woodbridgeartandmusic.weebly.com

Woodbridge Art and Music Event will be holding its debut literary strand on the Sunday of this year’s festival weekend.

The Literary strand will feature books about music, including a yet to be released special edition book of new Beatles photographs, and the biographies of Fleetwood Mac’s Stevie Nicks and Peter Gabriel plus a book at bedtime session for younger festival goers between 4:30 and 6pm.

Taken between 1962 and 1964, the Beatles photographs are part of a never-seen-before collection that was originally shot for the Beatles Monthly magazine. The photos, which are published for the first time in a limited edition cased hardback book, capture the Beatles in their private moments.


The book’s edited by Chris Charlesoworth, a friend of John Lennon’s, who will give a talk on how the photographs were discovered, as well as recalling his own experiences with John Lennon and Yoko.

Other books being discussed include Zoë  Howe’s biography of Stevie Nicks, following the highs and lows of her epic rock and roll lifestyle as pin-up front women for Fleetwood Mac. Daryl Easlea will also be discussing his biography of the pioneering artist Peter Gabriel.


A special children’s session with Gracie Wright, singer and author of children’s book ‘Silly Eric’ and Suffolk story teller Justine de Mierre, will round of the evening for t toddlers.

Earlier this year design students at University Campus, Suffolk, were asked to create visions of what future Woodbridge Art and Music Event posters, flyers, leaflets, T-shirts and bags might look like. These visions are being displayed at  a pop-up gallery at the Old Mariner. Students being exhibited include:

Saturday 8 and Sunday 9 August, Woodbridge Art Club, 15 Tide Mill Way, Woodbridge, Suffolk, IP12 1BY
Alongside their Summer exhibition, Woodbridge Arts Club will be holding a “Creating Art” event over the festival weekend, with potters, painters and lace makers working live in the studio next to the Tide Mill between 11am and 5pm. All festival goers are welcome to come and see them at work and talk to them, or simply wander around the gallery.


Daryl Easlea
Daryl Easlea is a DJ, compere, and consultant to record companies. His books explore great pop eccentrics, populist African-American music and prog rock. His essay, The Story Of The Supremes, accompanied the V&A exhibition of the same name. His writing can be found in Mojo, Record Collector, bbc.co.uk and many other places. Aside from regular BBC Essex appearances, his radio  broadcasting can be heard on www.sfob.co.uk/ iTunes; he has DJ'ed at festivals such as V and Big Chill, and at locations as varied as the Tate Modern Turbine Hall and the croisette at Cannes. He can also be seen in the BBC4 documentaries Tubular Bells: The Mike Oldfield Story and Nile Rodgers: The Hitmaker.  Easlea will be discussing his most recent book, Without Frontiers: The Life and Music Of Peter Gabriel (Omnibus Press) and how it’s possible to love prog and disco.


Justine de Mierre
Justine celebrates her 20th year as a professional performing artist this year – from a background in community and street theatre she moved over to storytelling seven years ago. Her multi-faceted storytelling practice ranges from the Storyplaytime and Adventure Tots sessions she creates for under 5s, to adults-only pub story nights and the rock ‘n’ roll and storytelling duo Darklove. Justine is passionate about making storytelling relevant and exciting for new audiences and looks forward to sharing some weird and wonderful children’s tales at WAME! More info on Justine can be found at www.sowhatsthestory.co.uk

Chris Charlesoworth
Chris Charlesoworth is in-house editor for Omnibus Books, the worlds largest publisher of music books. He edited the new Beatles book of unseen photographs and has access to thousands of unseen pictures of the fab four. He was also a friend of John and Yoko’s in New York during the 1970s.

The Woodbridge Art and Music Event takes place in the medieval town of Woodbridge, on the banks of the river Deben, in Elmhurst Park during the day on Saturday and in several venues around town at night.

Line-up correct at time of publishing.﻿

Read about the first line-up announcement in EADT feature here


Other events in Suffolk at Suffolk Tourist Guide